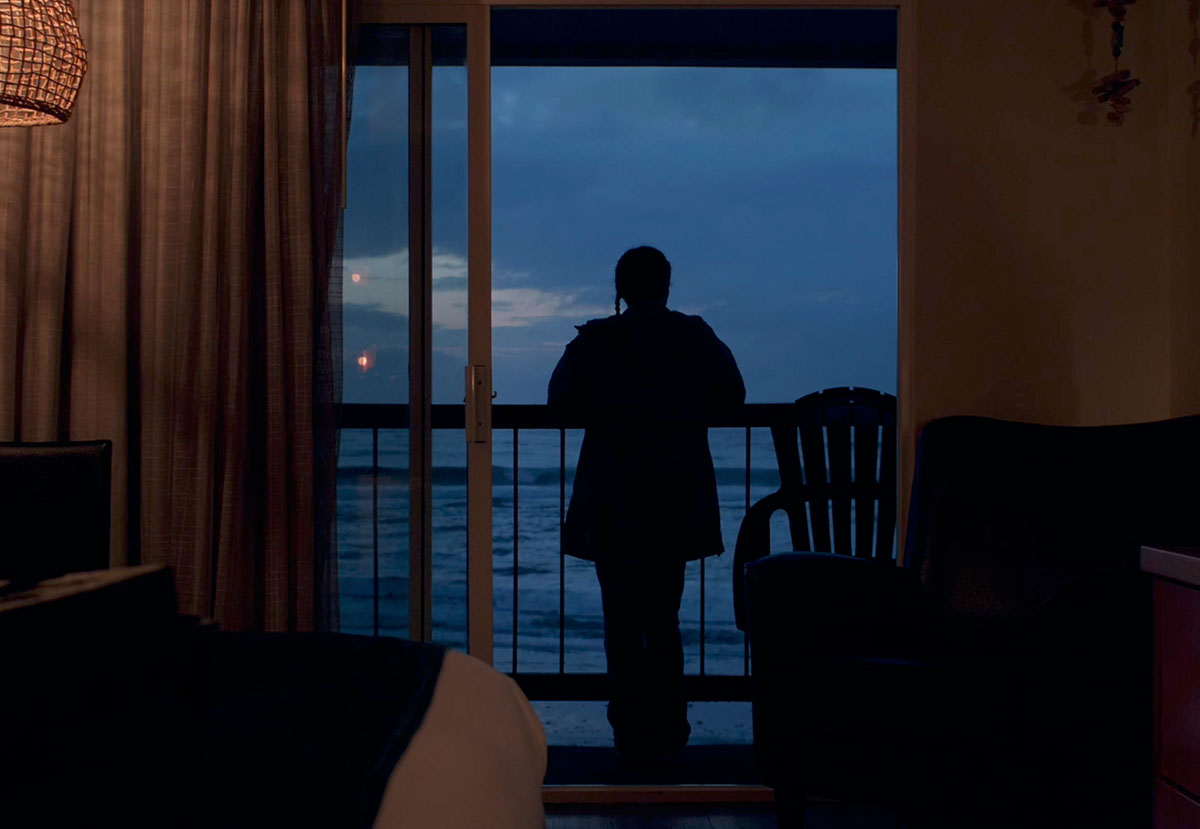 Since his first short film wawa in 2014, Ho-Chunk artist Sky Hopinka has become a singular name in the world of experimental documentary. His shorts, notably 2017’s Dislocation Blues and 2018’s Fainting Spells, navigate Indigenous and colonial narratives through evocative landscapes and layered sound design. In 2020 alone, he also explored these themes through a collection of poetry, Perfidia, and photography exhibitions at Bard College and Manhattan’s Broadway Gallery.

Hopinka’s debut feature, małni—towards the ocean, towards the shore, premieres April 2 on Metrograph’s virtual cinema before expanding digitally across the U.S.

Q. What sparked your interest in the Chinookan origin-of-death myth that frames the film?

A. The myth was one that I came across when I was learning Chinuk Wawa. It always stood out to me because of the idea that there was a choice involved in whether or not people come back when they die. There’s just something really beautiful to me about that belief, that agency, and the decisions and dilemmas at play.

I’ve had a long standing fascination in practices and philosophies around reincarnation from Indigenous perspectives. This story helped give a structure, or framework, to begin developing this film and about the repercussions and impacts of those beliefs.

Q. You’ve spoken about how experimental film has felt like a useful form to reflect on endangered languages. Has your relationship with this idea evolved over time?

A. I wouldn’t say it’s evolved, as I’ve tried to work through different tactics and techniques to see how these different approaches to language, text, and translation could be applicable in different situations, or to varying effect and affect. In each film I do see those approaches as experiments in trying to get across different levels of understanding and feeling, the variations of intrinsic and extrinsic knowledge, and what works and what doesn’t work. I see these ideas around the possibilities of endangered language and experimental film being an ever-growing box of tools to be applied in different situations. Sometimes the experimental approaches are insistent and overwhelming, and sometimes they’re a bit more gentle and familiar to an audience versed in local languages of film.

Q. Could you talk a bit about how you approached the cinematography? There’s a tension between immersive long takes and moments when you jostle the camera, which remind us that something (or someone) is mediating our perspective.

A. In this film I had been wanting to try long takes, and this feature seemed like a great place to try them out. I had been really inspired by the work of Chantal Akerman and Sergei Loznitsa and their use of long takes, and what duration and movement can do to a viewer’s experience of a film. I also knew I was going to include the more handheld qualities of my camerawork, and I like cutting on motion and those moments of rolling shutter or camera shake as I’m turning the camera on and off always lent themselves well to what I was doing in postproduction. Cutting on movement and small gestures that point towards the construction of the piece are small ways to acknowledge that I am the one making choices about what to show and what not to show, that my eye is subjective to so many things. If anything, cinematography in a nonfiction or documentary style can be a viewer’s way into the eye of the cameraperson and glimpse to their positions in relation to the subjects of a film.

Q. Where have you found inspiration that people might not expect?

Q. What is a memorable viewing experience you’ve had and why?

A. In 2014 I was a grad student at University of Wisconsin-Milwaukee, and at the school’s Union Cinema they show a lot of experimental work and have new films that pass through the theater. I had missed the Saturday evening screening of James Benning’s film Farocki, but one of my mentors, Carl Bogner, sent out an email that he was watching the film again on Sunday afternoon. I went and watched, and it’s a very beautiful and quiet film. A 77-minute long take of clouds passing by, and there was something special about seeing this film on a Sunday afternoon with a few of us in the theater, watching something of a silent eulogy from one friend to another, daydreaming and being still—together. I don’t know if it was the film or the company, but that day showed me a bit more of what a theater and a cinema can do.

Q. What is a project you’d like to make someday, however impossible it may seem now?

A. I’m working on a film I’ve been wanting to make for a very long time right now, about powwows. I guess that’s a bit more on the possible side of realization. So I’d have to say a Pacific Northwest road movie. I don’t know what it’s about or what I want it to do, but there’s a mood and a tone about that idea that I’m just drawn to. Kelly Reichardt’s films were the first that I saw that really expressed the ineffable lonely beauty of the Northwest in a tangible way where the punctum hits hard, so something in conversation with those gestures and that language. Maybe a way to further flesh out what I love about that landscape and why I still think of it as home.

A. Jordan Mercier and Drew Durepos while we were filming małni at a canoe family camping spot along the Columbia River. 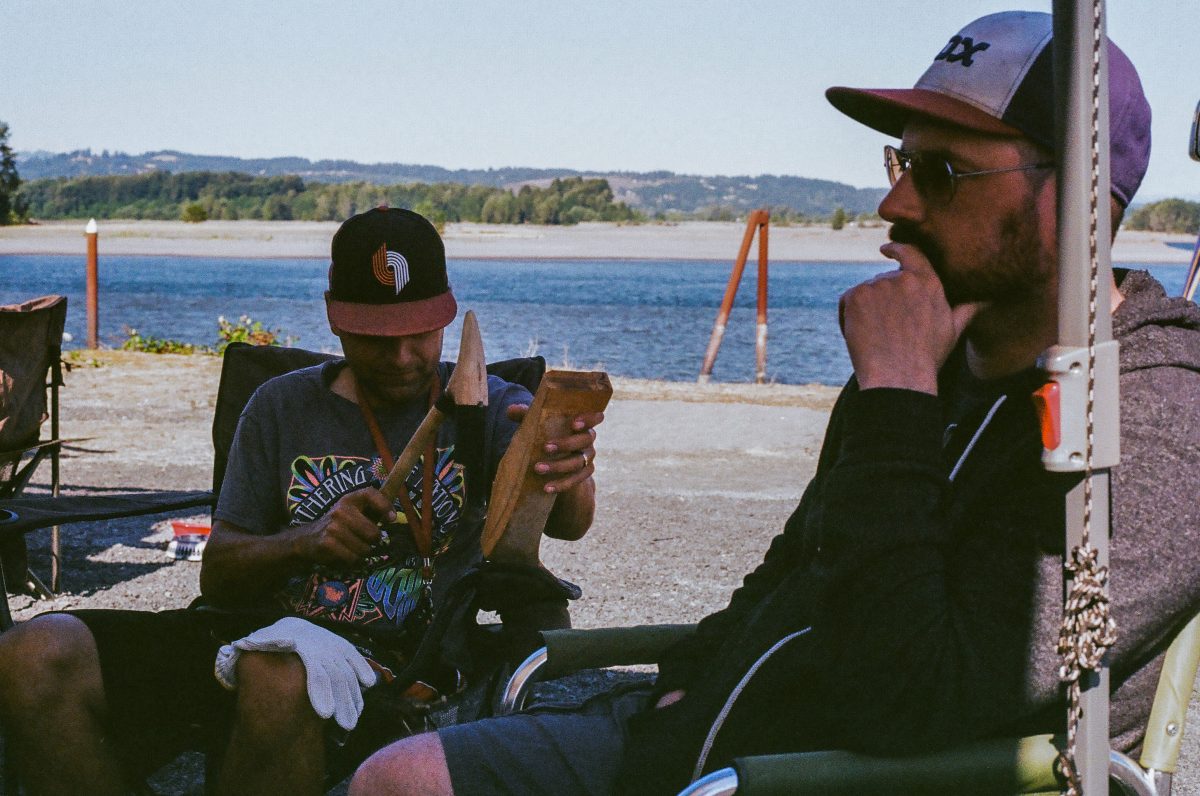