Kokoa a film by Moustapha Alassane. 2001, Niger, 13 min. From a pioneer of the then-newly independent Nigerian cinema, an enchanting and festive animated short. 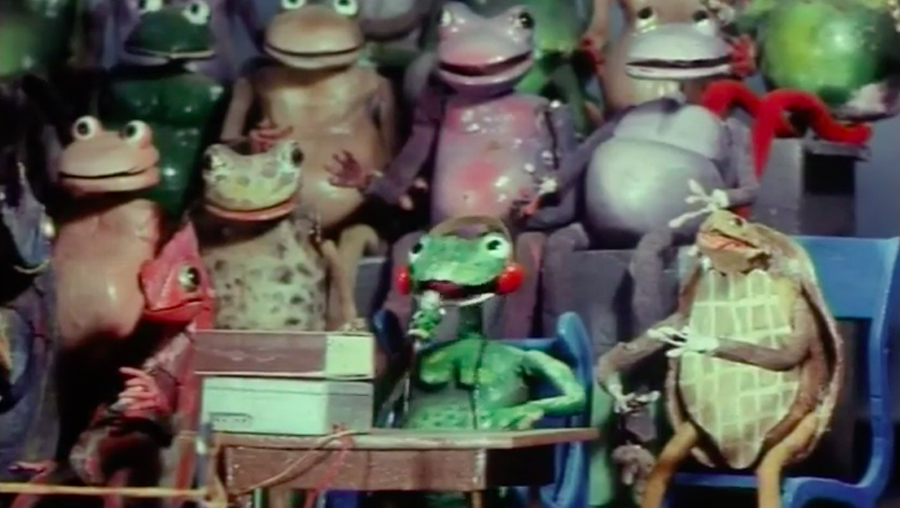 On the occasion of the upcoming first North American retrospective of Nigerien filmmaker Moustapha Alassane at The Museum of Modern Art, we are presenting Kokoa, a rare animated short made by one of the pioneers in African Cinema.  The exclusive series of 16 and 35mm prints entitled “Moustapha Alassane, Pioneer of the Golden Age of Nigerien Cinema” takes place May 12-15.  The program was co-organized with the Cultural Services of the French Embassy in the U.S. and La Cinémathèque Afrique de l’Institut Français. The retrospective will travel later to additional North American venues. Amélie Garin-Davet of Cultural Services of the French Embassy, who co-curated the series along with MoMA Film Curator Joshua Siegel, penned below the below short introduction to Kokoa:

In Kokoa, you are the spectator of a cheerful wrestling match between a toad, a chameleon, a bird, and an iguana — refereed by a crab. This colorful puppet-motion short film, made in 2001, is one the last creations of Moustapha Alassane (1942-2015), a pioneer of cinema from Niger and the first African director to make animated movies (with La Mort de Gandji, 1963). Directing a championship of Niger’s traditional game, Kokoa sums up well the tone of Alassane’s filmmaking: humorous, inventive, witty, and subtly ironic. Alassane was a true autodidact, reinventing cinema at a young age:

“I was, at school, excellent at drawing, and I ended up one day making shadow theatre. I could show my classmates lions, elephants… Neither my friends nor me knew at the time about cinema, nor had we heard about it. I had an assistant to help me, who’s now a marabou in Togo. When he noticed that what I was doing attracted people, and that he was the only one to know the technique, he started doing the same thing on his own. We were then two in the village and I had to improve my own technique. That’s how I thought of organizing a show in colors. To do so, I increased the light power and worked with a material that could let the light through: the transparent packaging of cigarettes packs! Later, I was able to go see movies, and I even ended up making on my own a film camera that worked!” MOUSTAPHA ALASSANE

Alassane would later meet and collaborate closely with French anthropologist and filmmaker Jean Rouch, and Canadian pioneer animator Norman MacLaren. He was part of the first wave of filmmakers after Niger’s independence in 1960.  Not only did he animate toads and puppets, but he also directed a wonderful parody of a cowboy movie, Le retour d’un aventurier (The Return of an Adventurer, 1966), as well as a satire of Nigerien materialistic society in F.V.V.A. (1972), and several other films and documentaries.

Looking at his very eclectic filmography and singular artistry, one can say that Alassane kept a curious mind throughout his life, tirelessly inventing new techniques and exploring for each film new territories like a trailblazer — deservedly getting the nickname of the “African Méliès”.

To enquire about the rights of Moustapha Alassane’s filmography, contact La Traverse.