Madeleine Among the Dead a film by Bertrand Bonello. 2014, France, 1o min. With Isild Le Besco and Alex Descas. Dreamt but never finished, this daring, indefinable project contains the magic of unrealized work. 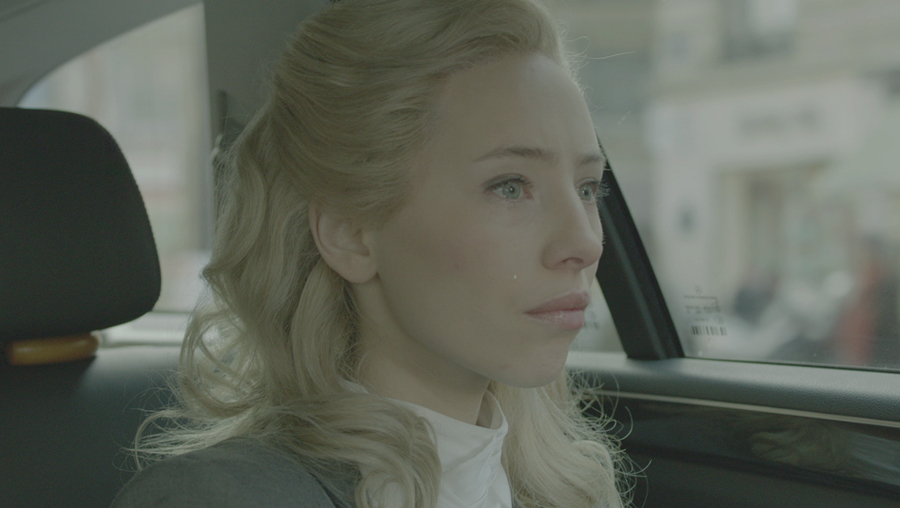 To coincide with the French release of Bertrand Bonello’s new film, Nocturama, Le Cinéma Club presents an atypical film sequence by the same director. The scene is the sketch, or skeleton, of one of his so-called “ghost movies” — movies he dreamt and conceived but which never took a finished cinematic form. In Madeleine Among the Dead, Bonello wanted to tell Hitchcock’s Vertigo (1958) from the perspective of Madeleine (played by Kim Novak), not Scottie (James Stewart). He only filmed a scene of this project as part of another film by Antoine Barraud, Le Dos Rouge, in which Bonello plays the role of a director by the same name; a director whose films are all either invented or his “ghost-movies.” In Le Dos Rouge, the scene we’re presenting is projected as Bonello presents one of his films during a retrospective at the Pompidou Center. Bertrand would have shot the scene differently if he had directed the feature. Nonetheless, it offers a glimpse into the nature of his daring project, and contains within it both the beauty of rough drafts and the magic of unrealized works (think of Kubrick’s Napoleon, or Visconti’s In Search of Lost Time). Madeleine Among the Dead was never produced because Universal blocked the rights ­— even though “the film was neither a remake, a spin off, a prequel or a sequel, but rather a hybrid work that is undefined in contractual terms”, as Bonello explains. Initially, Bonello says he wanted to start his narrative six months before it begins in Vertigo — just at the moment when Gavin Elster, Madeleine Elster’s husband, trains Judy Barton to look and act like his wife, as part of his plan to make Scottie fall in love with her.

In this scene, then, Isild Le Besco plays the role of Bonello’s Madeleine, as she walks in the streets of Paris, takes a cab and enters a hotel room. It is made of a few simple shots and minimal dialogue, as well as dramatic use of Gabriel Fauré’s Requiem, which Bonello chose because, “when Madeleine walks towards this room, she is walking towards her own death.” For those who remember Vertigo, the scene will bring to mind the moment when Scottie and the audience discover Gavin’s cynical plot. Adopting Madeleine’s point of view emphasizes how terrible it is for her, a puppet tangled in her own strings. In Vertigo, we wait trepidatiously with Scottie in his room, but in Bonello’s version it is her inner turmoil that we witness. For a few minutes, Bonello transfers the dramatic implications of the original film from one character to the other.

“Vertigo is perhaps the most insane and beautiful story in the history of cinema. It also marks the shift from classical cinema to modern cinema (1958/1959), a transition which the film literally carries within itself, between its first and second part. It’s a fetish film. And cinema is about fetishism.” BERTRAND BONELLO

Bertrand Bonello is one of contemporary French cinema’s most original directors. Born in 1968 in Nice, he was trained as a classical musician and has collaborated with numerous artists such as Françoise Hardy and Daniel Darc. He is the director of several shorts, including Qui Je Suis (1996) based on Pier Paolo Pasolini and Cindy: The Doll is Mine (2005), with Asia Argento, as well as two documentaries. He directed eight feature-length films (three of which were presented in the official competition in Cannes): Something Organic (1998), The Pornographer (2001), Tiresia (2003), On War (2008), House Of Tolerance (2011) and Saint-Laurent (2013).

His latest film, Nocturama, is just as daring: it portrays a group of youngsters from different social backgrounds who set bombs all over Paris. The script was written and financed before the recent wave of terrorist attacks in France, and Nocturama has been released in a context that gives it new layers of meaning. Bertrand Bonello imagined the movie more as an action film with an off-screen political message. It was born of his impression of a society that is suffocating, where “silent protest gives way to the desire to blow things up.” Bonello elucidates: “Nocturama is more of a cinematic gesture than a political one, but I made it with a full political conscience.”